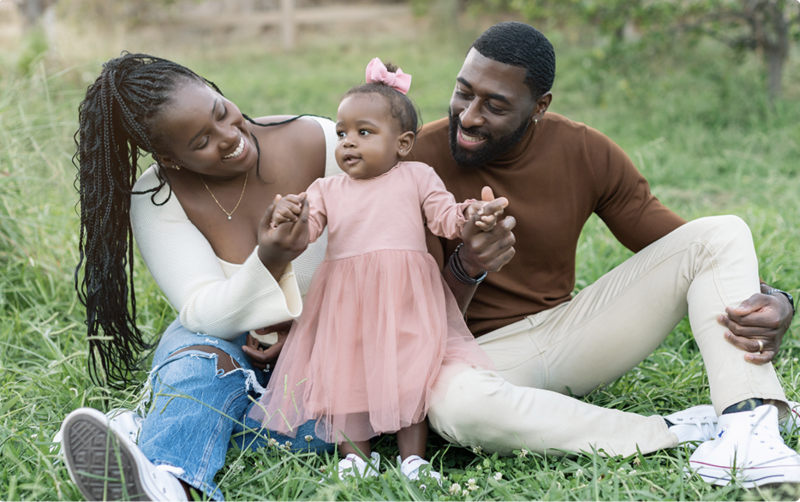 “I was freshly postpartum and very emotional. I cried quite a bit,” Lillian says. “It took some time for my husband, Justin, to process the news, but then he, too, felt the weight of it.”

An inherited blood disorder, sickle cell disease (SCD) causes red blood cells, which are normally round, to become hard and C-shaped like a sickle. These abnormal cells can get stuck in small blood vessels and block blood flow. This causes pain and complications such as stroke and infections.

According to the Centers for Disease Control and Prevention (CDC), SCD affects millions worldwide and is common in people whose ancestors came from African, Hispanic, Middle Eastern, Indian and Mediterranean countries. In the African American community, about one out of every 365 babies is born with SCD.

“We decided to choose faith over fear and to educate ourselves about the disease.”

After Savannah’s diagnosis, relatives rallied round Lillian and Justin, reassuring the young couple with their words, love and prayers.

“As Christians, we have a firm belief in God and what He has planned for Savannah’s life. So, we decided to choose faith over fear and to educate ourselves about the disease,” Lillian says.

She and her husband joined online groups for parents of children with SCD. The couple also tapped their personal network, gleaning information from friends with the disease to better understand what they might expect their child to experience.

From these online and face-to-face conversations, the couple learned the basics of living with SCD. That knowledge was further expanded when they took Savannah, then 5 weeks old, to her first appointment with Cedars-Sinai pediatric hematologist-oncologist Dr. Nicole Baca.

“We were already pretty well informed, but then Dr. Baca took us through a full presentation about the disease—what it is, how it happens and how it happened to Savannah,” Lillian says.

Their early discussions with Dr. Baca explored potential treatments, such as gene therapy and bone marrow transplant. They also reviewed the medication and care choices they would need to make in their daughter’s first year…