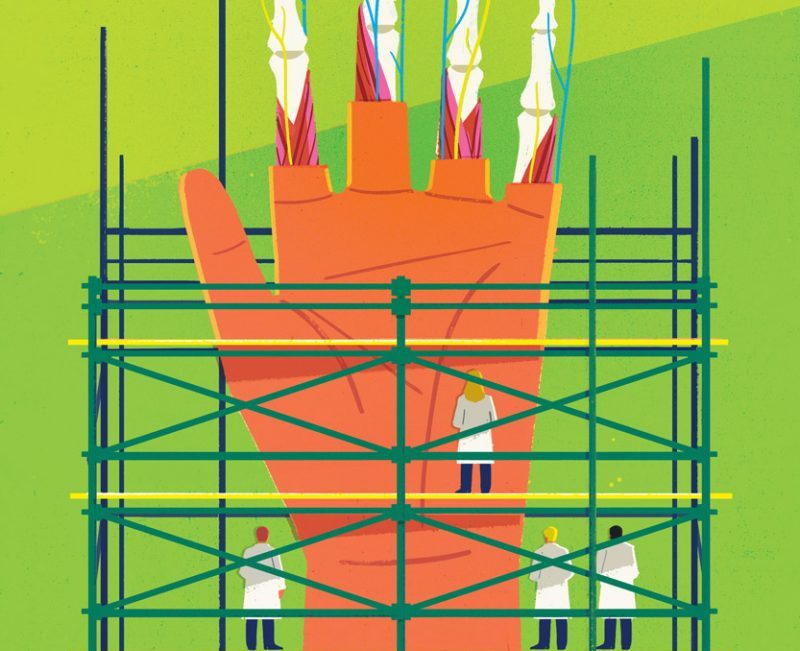 As a machinist, Jose Manzo uses his hands a lot. When he had a serious accident with a machine press at work—losing three fingers, a thumb and part of his palm—he feared the worst. He had no idea how doctors would ever restore function to his left hand.

Surgeons removed damaged bone and tissue and covered his wound with a skin graft, but the injury left the 33-year-old with only a pinky finger. “With just one finger, I wasn’t able to hold anything, not even a bar of soap or a glass of water,” Manzo says.

He was referred to Keck Medicine of USC microsurgeon Milan Stevanovic, who recommended a surprising solution: transferring the big toe of Manzo’s left foot to his left hand, where it could function like a thumb.

To improve the hand’s appearance, Stevanovic and his team replaced the skin graft with skin and blood vessels taken from Manzo’s thigh. Next, they improved the mobility of his pinky, so he could straighten and curve the finger. Finally, they transplanted the big toe from his left foot to replace his missing thumb.

Now Manzo can grasp objects as small as a needle between his pinky and his new thumb. His hand looks more natural, too. “Even though I had the surgery done not even two years ago,” he says, “people think my hand was like this since birth.”

Outcomes like Manzo’s were once merely a dream. But today, the field of microsurgery empowers doctors to save limbs, cover large wounds and reconstruct body areas damaged by trauma, burns or cancer. Microsurgery techniques also enable surgeons to restore form and function to those born with bone and muscle defects or missing toes and fingers.

“Fifty years ago it was unthinkable that we could put back a hand or a finger,” says Stevanovic, chief of the Hand Service in the Department of Orthopaedic Surgery at the Keck School of Medicine of USC, who is recognized worldwide for his expertise in treating injuries associated with the upper extremity (from the shoulder to the hand), including the nerves. “And no one thought of doing face transplants, which today is probably one of the most difficult and amazing feats that microsurgery can do.”

Despite patient demand and microsurgery’s dramatic results, microsurgeons remain in short supply. Members of the American Society for Reconstructive Microsurgery number only about 500. Compare that to, say, the American College of Cardiology, which boasts a membership of more than 52,000…